From Robin's SM-201 Website
Jump to navigation Jump to search 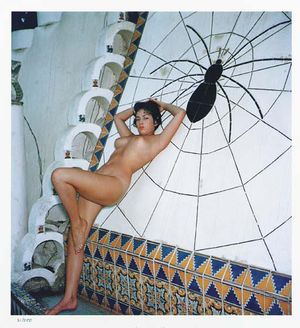 The "House that Jack Built" the house at 3041 Vale Vista Trail in Hollywood has a history of its own. Thousands of pinup pictures were taken on the property owned by John McDermott, including pictures that appear in House of Milan magazines.

Harold Lloyd
The picture to the right is of Tura Satana. It was taken by Harold Lloyd at the Spiderpool (part of the John McDermott estate). It is printed as a 3-D photo on p.100 of "Harold Lloyd's Hollywood Nudes in 3-D"

It clearly shows "the spider" for whom the pool is named. Water would flow from the top of the mosaic, across the spider, and into the pool below.

From Yahoo Spiderpool group
There are bondage pictures at the pool, and at one time, I thought they might have been done by HOM, from the style(s) in the pictures, but we now know that the timeline would have been wrong, and they were probably done by John Willie, as the book claimed.
See: A John Willie Portfolio)

For a history of the "House that Jack Built", I have archived the following articles from the Yahoo Spiderpool Group moderated by Rowan:

Three of the major sources for this series of articles were:

Why this topic was chosen for inclusion in our website